You’ll find all sorts of useful info about HL:R, who created it and how to get in touch with us if that’s what you want to do.

With production now in full swing and momentum building with our target audience, we’re seeking a publisher or a literary agent. If you can help, please get in touch.

Written by Christophe Philipps and illustrated by Simon Newbury, Holy Land: Resistance is a taut dystopian thriller with Holocaust overtones set in ‘Holy Britain’ circa 2093. 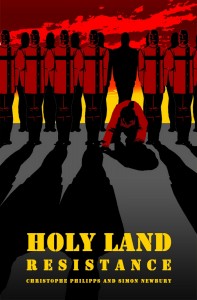 Holy Land: Resistance is a terrifying, all-too-possible vision of the future, drawing on contemporary phenomena – notably, the war on terror, systems of power, the rhetoric of fear, religious fundamentalism, subjugation and misogyny, and the political rivalry we see every day but are powerless to control.

It charts the fight for power within christian fundamentalist regime The Path, for freedom by the Magdalene insurgency, for acceptance by the beautiful but broken Bethlehem Christi, and for redemption by a fallen angel named Andeo Cuvar.

An epic for our times, it is a self-contained story in an immersive world.

Holy Land: Resistance is intended as part one of a trilogy – Resistance, Redemption and Revelations – though there is scope for further stories. To find out how the trilogy (and related stories) will play out, you’ll need to read the completed works – we’re giving nothing more away (and we wouldn’t want to ruin the surprise).

The Magdalene Insurgency was all but wiped out during the Great Purges. Their failure saw the prophet-messiah Damascus Jacobi and The Path sweep to victory. It rules with an iron fist, demanding devotion, sacrifice, glory.

But the Magdalene’s survive in secret, driven to desperation . . . And when Jacobi dies, The Path is left in chaos.

The year is 2093. Their battleground is Holy London. Resistance lives.

Would you die for their sins?

We have developed a naturalistic graphic style to complement the maturity of the story, which helps to ‘place’ the reader in the action and with the characters in a very real way.

In particular, we have ‘cast’ the characters with real people to help create a realism which adds a grounded sense of character/reader identification, as well as pathos and tension as the story unfolds.

We have also created a vivid setting, developing the future cityscape of Holy London, the Grand Cathedral and, in contrast, the desolated underground system where the Magdalene Insurgency is based into a fully realised world at once identifiable, imaginative and memorable.

Through this naturalistic and mature graphic style, the complexities of Holy Land: Resistance play out to chilling effect while also making it a comment on our modern world.

To see some conceptual artwork and gain an insight into our creative process, click here.

On the surface, Holy Land: Resistance deals with two core themes: the mechanics of religion, and the pursuit of power. Indeed, throughout the story, the two are thematically comparable, such is their allure in uncertain times. But faith, rather than religion, is also a source of incredible strength for many of the characters – even for many of the so-called ‘heathen’ Magdalenes. 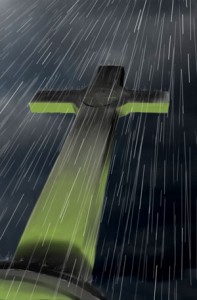 Faith and its corruption is a central theme in Holy Land: Resistance.

However, a number of other themes are explored. Through the protagonist Bethlehem Christi, the role of women is explored in detail, from her own uncertainty of place in a male-dominated world, and as an intelligent, resourceful and intuitive adult discovering (and questioning) her potential.

Unrequited love forms a counterpoint to the larger themes on display, though the deep, trusting love between two central characters also illustrates that such a basic human impulse can still be met in dire circumstances.

Modern-day concerns play out through the narrative, from terrorism (and how to define it), the need for strong leadership in uncertain times and the yearning for faith when faced with despair.

The novel also references many iconic moments from history, from the death of Lenin and the Nuremburg Rallies, to ‘Blitz spirit’, 9/11 and the war on terror, and the current economic climate.

Lastly, hope propels the narrative momentum, be it hope in the ‘faithful’ characters that The Path will find security, that the Magdalenes will finally attain freedom, that affections may be returned, that we may understand our purpose. As with so much of life, hope is the key; in many ways it is a story about hope itself.

In 2005, Christophe Philipps wrote a screenplay entitled Holy Land: Protectors of the Faith as his undergraduate degree final project, which was mentored by best-selling novelists Sam North (The Automatic Man, Diamonds, The Unnumbered) and Alison Habens (Family Outing, Dreamhouse, Lifestory).

His intention was to explore the mechanisms of power, control and fundamentalism – drawing on current events on the world stage – while simultaneously crafting a plausible, imaginative, suspenseful and memorable vision of the future. The screenplay went on to receive one of the course’s highest ever marks for creative writing and was short-listed for several international screenwriting competitions. 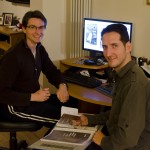 Writer Christophe and artist Simon  during a production meeting.

Christophe has since worked with his long-standing creative partner, artist Simon Newbury, to develop the story for the graphic novel medium, affecting a change of name to Holy Land: Resistance to reflect the modified sensibilities of the narrative.

Now working from a revised full script, it has been a true collaboration, with both writer and artist bringing their skills to the fold and helping to update, refine and deepen the story as a whole.

We work closely together all aspects of the story, dialogue, exposition, characterisation and graphical style, including storyboarding, design, layout and atmospherics, as well as Holy Land: Resistance‘s promotion as a creative and commercial product.

In developing the graphic novel adaptation, we draw inspiration from graphic novelists Grant Morrison, Dave McKean, Neil Gaiman, Frank Miller and Eddie Campbell, from a host of literary works including George Orwell’s 1984 and Animal Farm, Yevgeny Zamyatin’s We, Franz Kafka’s The Trial, Margaret Atwood’s The Handmaid’s Tale and Albert Camous’ The Plague, and from films and TV including Battlestar Galactica, Babylon 5, Game of Thrones, and the Terminator and Alien series.

By far the biggest influence, however, continues to be the world around us – as disseminated through the media, politics and organised religion – and especially that most valuable thing: human nature.

Holy Land: Resistance is aimed at the same market as that of Alan Moore and Dave McKean, although it also has strong appeal for a female readership. It resonates with mature audiences and the wider graphic novel fan market alike. 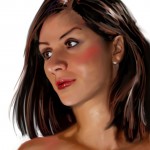 Through the central protagonist of Protector Bethlehem Christi, it has a strong female character in whom female readers can identify. While the story deals with the theme of faith, it is more accurately described as exploring the mechanics and corruption of organised religion, as well as the dangerous allure of power.

It therefore appeals to theists and atheists alike, as well as fans of political thrillers, action adventures, and the fantasy and science fiction genres.

Early indications from test audiences and readers of the specimen chapters, source screenplay, synopsis and blurb have proved extremely positive. 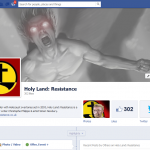 As development has gathered pace, we have launched a multi-tiered promotional campaign to raise awareness, build a fan-base, crowd-source elements of the story and road-test blurbs, taglines, etc.

We have also used this close interaction to identify our core audience and develop means to tap into other demographics, gaining insights from them that have informed the story so that we can focus it as the story they want to read and buy.

We have launched a popular Facebook page (www.facebook.com/HolyLandResistance), which regularly receives feedback from its members and has become one of our main channels for interacting with our fan-base, as well as a Twitter account (twitter.com/HLResistance) that is followed by scores of useful contacts, many of whom have expressed support for the graphic novel. 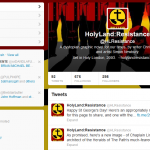 We frequently update both platforms with insights into the development process and sample images (though never finished images as found in the completed novel), and they have proved invaluable tools in positioning Holy Land: Resistance in the graphic novel market.

For example, the Facebook page has enabled us to reach nearly 102,000 people, which goes some way to illustrating the broad reach of demographics the novel has already attracted.

As you can see below, the Facebook page indicates our core audience as ranging from age 25 to 44, with a fairly even gender split – which have been a target audience in the creation of the novel itself. It also shows the novel has garnered interest from overseas, including as far as away as Australia, the US and India. 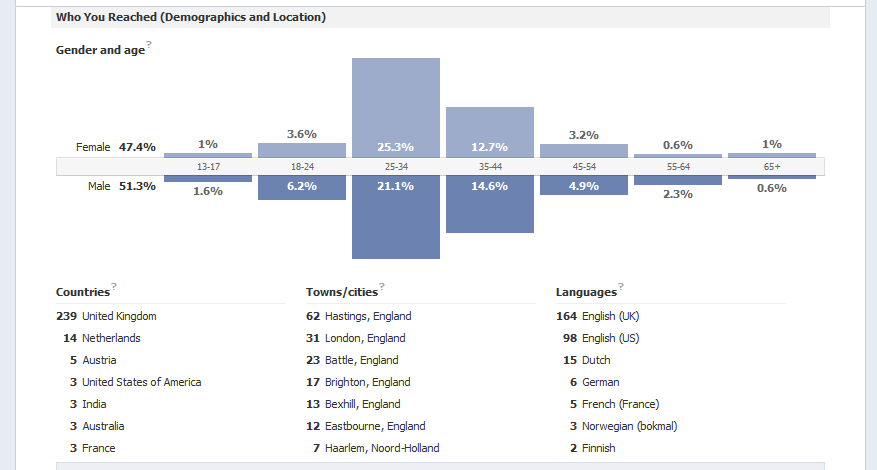 Breakdown of audience demographics from the HL:R Facebook fan page

We have also promoted Holy Land: Resistance on a number of graphic novel fan sites and forums, and have received extremely positive feedback in all cases.

Recognising the potential of online promotion, we have also taken the opportunity to expand the ‘universe’ of Holy Land: Resistance. As you will have seen, the novel has a total of four websites, with a simple ‘landing page’ on www.holylandresistance.co.uk. From here, visitors are invited to ‘choose their allegiance’, entering either the Path-Walker or Magdalene sites.

These explore, in mirrored fashion, various aspects of the Holy Land universe, from background information on The Path and the Magdalene Insurgency, to contemporary (to the novel’s setting – 2093) elements of the story itself, such as the organisational hierarchy of The Path and its military forces, and what lies beyond the border of the novel’s setting, Holy London. These are written in the ‘voices’ of the opposing sides up to shortly before the narrative’s start (elements of the novel’s plot itself are not revealed) to help build the background and atmosphere, and are useful in building audience interest without the need to give too much away.

At the bottom of every page, too, there are links to the Holy Land: Resistance Facebook and Twitter pages, the option to ‘switch allegiance’ to the opposing site or to enter the ‘production’ tier of the websites – of which this page is one of five (also including a production blog, conceptual artwork, information on the creators and contacts) that explore the novel as a commercial and creative product. It is on this tier that audiences can also leave comments, further helping us craft Holy Land: Resistance into the book our audience will want to read and buy.

For Holy Land: Resistance to reach its intended audience – and be the commercial and critical success we believe it will be – we need a literary agent to champion the piece to publishers, or a publishing house to bring it to print and distribution.

If you are a literary agent or publisher and would like to help, we have developed specimen chapters and a synopsis, as well as full character biographies, conceptual artwork, background materials, chapter breakdowns, chronology – and, of course, online promotion starting with this website. We are happy to send these upon request, as well as audience data from the Facebook page.